The 10 Most Lethal Sniper Rifles

Take a look at this compilation of the “10 Deadliest Sniper Rifles.” 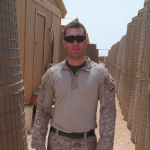 Nick Coffman spent five years in the Marine Corps as a network operator, having served in Iraq with RCT-8 (8th Marine Regiment) and later with MARFORCOM. He left active duty in 2012 to pursue a career in IT project management, and in 2015 he completed his master’s degree in that field. In his spare time he enjoys hunting, fishing, and following mixed martial arts.