You Can Help: Send Badly Needed Gear to Ukraine

Fighting a war is miserable enough with the best equipment in the world. But, imagine facing your enemy shorthanded: without enough weapons or tactical gear to give you a fighting chance—David vs. Goliath.

In addition to the weapons, you need boots, ballistic helmets, gloves, body armor,  knee and elbow pads, and much more to help even the odds. You need help, and you need it fast. Lives depend on it.

The good news is that the equipment is all out there, and a bunch of selfless folks have organized to help get it to where it needs to go ASAP.

It was 1940, and the US had not yet entered WWII. Our British allies stood alone against Hitler and the Nazi war machine. British citizens faced the threat of invasion as they evacuated more than 300,000 troops from France ahead of a German Blitzkrieg.

This escape has become known as the “Miracle of Dunkirk” or simply Dunkirk. The troops survived to fight another day but, in doing so, left much of their equipment and many weapons on the beach.

They needed help, and they needed it right away. That’s when the Americans stepped in. The following notice was run in the November 1940 issue of American Rifleman. 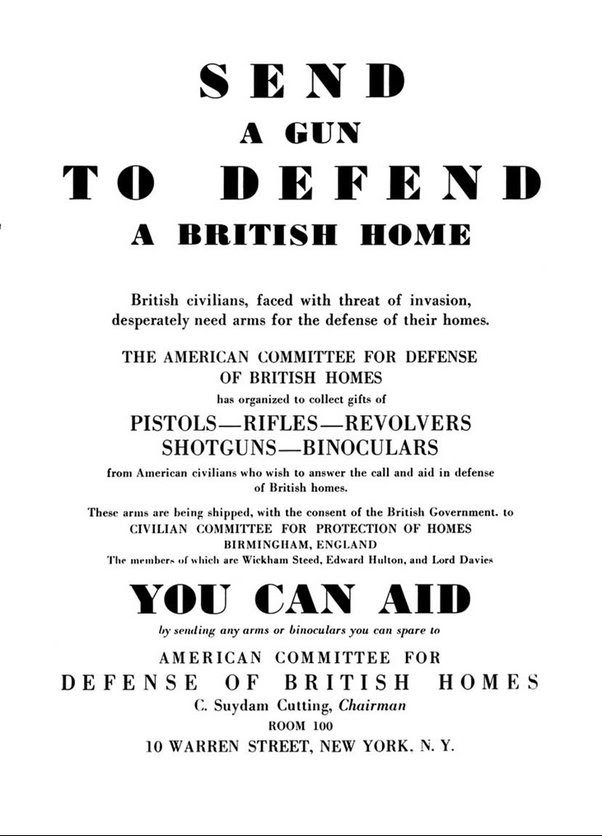 The American Committee for the Defense of British Homes was a national organization that collected weapons, stopwatches, helmets, and other equipment for the British Home Guard during WWII. Local representatives collected donations from banks, prisons, hospitals, and other large institutions.

In the end, more than 20,000 firearms(from private owners)were collected in addition to thousands of rounds of ammunition, scores of steel helmets, binoculars, and the like.

Our British allies stood their ground, in the end remaining free from German oppression.

After the war, most of the firearms were mailed back to their U.S. owners by the Brits.

How You Can Make a Difference

Today, we stand poised and ready to help again. The people of Ukraine desperately need your assistance.

Five Ukrainian here in the U.S. have started a grassroots program they call “Gear for Ukraine” – a platform where veterans (or any citizen) can donate body armor and other essential gear to the Ukrainian territorial defense warriors.

This is what they are telling us in an internal memo dated yesterday:

It’s been 12 days since Russia has invaded Ukraine, bombing its cities and villages, and killing hundreds of civilians — including dozens of children. In these 12 days, people around the world have stepped up to help Ukraine and its army.

Read Next: Lend Lease For Ukraine: It was not a Good Deal for US Taxpayers in WWII.

Yet nearly 100,000 courageous fighters who joined territorial defense are average civilians fighting side by side with the Armed Forces of Ukraine. They’re extremely short on bulletproof vests, helmets, knee and elbow pads, thermal visors, and other critical military gear. Essentially, they are fighting without any armor, leaving their brave hearts vulnerable to the enemy.

These brave men are appealing to US Veterans (and all Americans) for support.

There are repeated requests for body armor and any tactical gear that can be donated to those who need it. 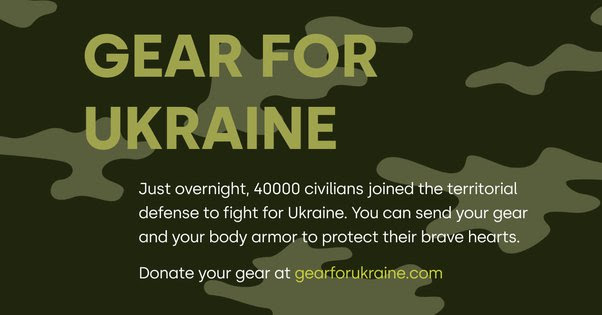 Please visit http://gearforukraine.com to learn more about this noble cause and how you can make a difference.

Hundreds of thousands of Ukrainian citizens are joining the Territorial Defense Force to fight for their homeland.

If you want to help these citizen soldiers, all you have to do is visit their site and fill out a simple form noting items available for donation. They have a team ready to handle any other logistics, including shipping costs of your donated items.

The valuable equipment won’t sit in a warehouse somewhere; all donated body armor and gear will be sent to Ukraine as quickly as possible using special transport.

This old warrior has already dug through his garage and has a pile of gear ready to go.

Won’t you please take a minute and do what you can to help as well?

If you’re just tuning into SOFREP for the first time, click here to enjoy a free 2-month trial membership and be kept up to date on developments in Ukraine and elsewhere around the globe.

Lend Lease For Ukraine: It was not a Good Deal for US Taxpayers in WWII.

SITREP on the $5.6 Billion in Weapons the US Sent to Ukraine So Far

Biden Asks Congress for $33 Billion More in Assistance to Ukraine

These Are The Armored Humvees Headed to Ukraine