Ask a Fighter Pilot: What Are My Chances Of Making It?

I’m a prospective candidate going into the Naval Academy wanting to become an aviator afterwards and I was curious about how many people go into flight school wanting to be a fighter pilot after becoming an officer? And what is the expectancy of the military to actually maintain combat pilots with the ever increasing roles of the newer drones? – Josh C.

Thanks for the question, Josh!  First of all, let me commend you on your desire to serve your country.  We hear a lot about the “greatest generation” being those who signed up to fight the Nazis and the Japanese in World War II, but I am here to tell you that the greatest generation still exists today.  To understand why, I think it’s worth putting military service into perspective.

The United States military saw its greatest increase in strength of active duty personnel between 1940 to 1945 when it grew from less than half a million to over 12 million.  Today, roughly 120 million (less than half of the total U.S. population) is fit for military service.

Over 4 million young men and women reach the age of military service each year, yet we are fighting a global war with an active duty force of 1.4 million.  Think about that for a second – just 1% of Americans fit for military service are actually serving.  You are in the fortunate minority and I applaud you for ushering in the next greatest generation!

To be sure, you and the young men and women who will join the military in the coming years will see the drone fleet continue to grow, although you will probably see a greater increase in the commercial market for drone technology – as much as 19% between 2015 and 2020, compared to 5% in the defense sector.  Part of that disparity in growth is due to the fact that the U.S. military has already been operating drones – quite effectively, I might add – in overseas contingency operations since 2001.  The Pentagon has acknowledged the value that drones (also known as RPAs or Remotely Piloted Aircraft) provides our combatant commanders and projects a 50% increase in daily drone sorties in the next four years.

But, fear not.  I predict that the U.S. military will continue to invest in manned aircraft until long after I am gone.  Part of the reason is philosophical in that I believe war must continue to have a human element involved to be morally just.  But, a larger reason is that drones are very good at some things (remaining overhead a target for long periods of time to provide an unblinking eye) but are not ideal for providing support to troops in contact on the ground.  Having been on both ends of the radio during Close Air Support missions, I can tell you that there is a psychological effect (positive for our forces and negative for the enemy) to have an A-10, F/A-18, F-16, or other strike platform overhead.  A drone just won’t do.

If you’re still not convinced, the published Naval Aviation Vision (2014-2025) does not project replacing existing manned aircraft with RPAs and focuses on recapitalization of assets to meet the demands of the future.  That is what we like to call “job security” – Hooray for pilots!

You will already be in an elite 1% of Americans serving in the military.  Regardless of what warfare community you are assigned to upon graduation, you are serving a vital role.  The U.S. Naval Academy Class of 2016 selected 241 midshipmen for Navy pilot, 79 for Navy NFO, 95 for Marine Corps pilot, and 4 for Marine Corps NFO – almost 40% of the graduating midshipmen pursuing a career in aviation.  You will also be competing with newly commissioned officers from the NROTC program and Officer Candidate School that makes up 75% of all new officers.  And, no matter where you go to school, you will be competing with all of them.  But, how many will end up sitting in the cockpit as a fighter pilot? (Hint:  Not many – so study hard in flight school!)

Following D-Day in World War II, the U.S. had a total of 12,200 aircraft in the European theater.  Today, the combined U.S. military has roughly 13,000 aircraft – of which only 5,000 are fighter, attack, or bomber aircraft.  And, although the numbers change from year to year, roughly 400 Navy and Marine Corps pilots earn their Wings of Gold each year after completing the year-long jet training syllabus in either Kingsville, Texas or Meridian, Mississippi.

Not to discourage you (trust me, we’ve all been there), but you will defy the odds by becoming a fighter pilot.  The U.S. Naval Academy Class of 2019 had 16,101 applicants and admitted 1,191.  If history proves accurate 1,100 will graduate in three years.  Of those, 240 will select Navy pilot and 80 will enter jet training.  By the time the Class of 2019 reaches the fleet, maybe 50 will be fighter pilots.

Now, that is what I call the greatest generation!  Good luck! 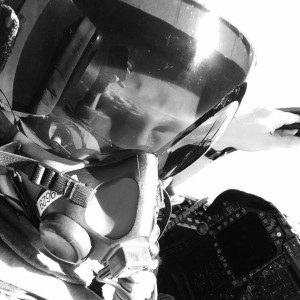 The Road to Wings: How to become a US Air Force pilot

Escadrille To Eaglejet: One Family’s Legacy…

Innovation on Morse Code for the US Military