You can’t teach an old dog new tricks, or can you? This is the question that several users of the trusted H&K G3 rifle are attempting to answer, while looking for a Designated Marksman Rifle (DMR)! The extremely popular .308 (7.62X51 NATO) weapon was procured by more than 60 nations worldwide and produced under license by many of them. As a result, and despite the fact that its designing origins can be traced back as far as WWII, several millions of them are still in use.

Many armed forces that had made the transition (or are currently making it) to the .223 (5,56X45 NATO) caliber are looking to upgrade the old reliable workhorse with new tactical forearms and stocks, pistol grips and bipods and heavier, more accurate barrels. By doing so, they are getting a very reliable and more importantly, cheap Designated Marksman Rifle (DMR).

Could that work? Is it possible that an upgraded 60-year-old design can compete with modern DMRs, such as the H&K G28 (H&K 417 variant) or  FN MK20 SSR (FN SCAR Mk17 variant)? Well if something sounds too good to be true, then it probably is. But that’s not the entire truth here!

The weapon uses the same caliber as its aforementioned modern adversaries and has a unique roller-delayed blowback operating system, that is inherently very accurate. But that’s not all. The rifle is the epitome of reliability. The only way you can have a jam or malfunction with it, is if you use cheap and unreliable ammo. Equipped with an accurate barrel, a decent scope and the new millennium’s updated and ergonomic tactical parts, you get a DMR which is almost as good as its modern counterparts, at a fraction of their cost.

Now add the fact that the rifle already exists in the inventory of countries that have used it for decades, and most of its spare parts are literally just lying in some army depot, collecting dust. That means that mpst everything is free of charge and military personnel are already familiar with it, and don’t require re-training!

But what “almost” means? Well, the rifle lacks most of the modern features, that a modern DMR offers. i.e. Multi-caliber platform? User friendly ambidextrous fire selector or cocking handle? Lightweight, space technology materials? Forget about it! It’s a big, heavy, Teutonic machine of havoc! If you’re looking for charm and grace, look elsewhere!

Come to think about it, spending some money to update my old G3 sounds like a bargain these days!

Share This:
About "V" The Greek View All Posts 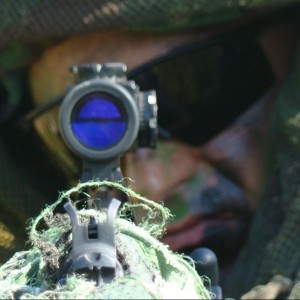 Paul Kern: WWI Soldier Who Stayed Awake for Forty Years After He Was Shot in the Head