A prominent newspaper in Turkey is demanding that US personnel and aircraft be evicted from Incirlik Air Base. The tensions between the US and Turkey went up dramatically after the Trump administration decided to send weapons to the Kurdish militia to support their efforts fighting ISIS. 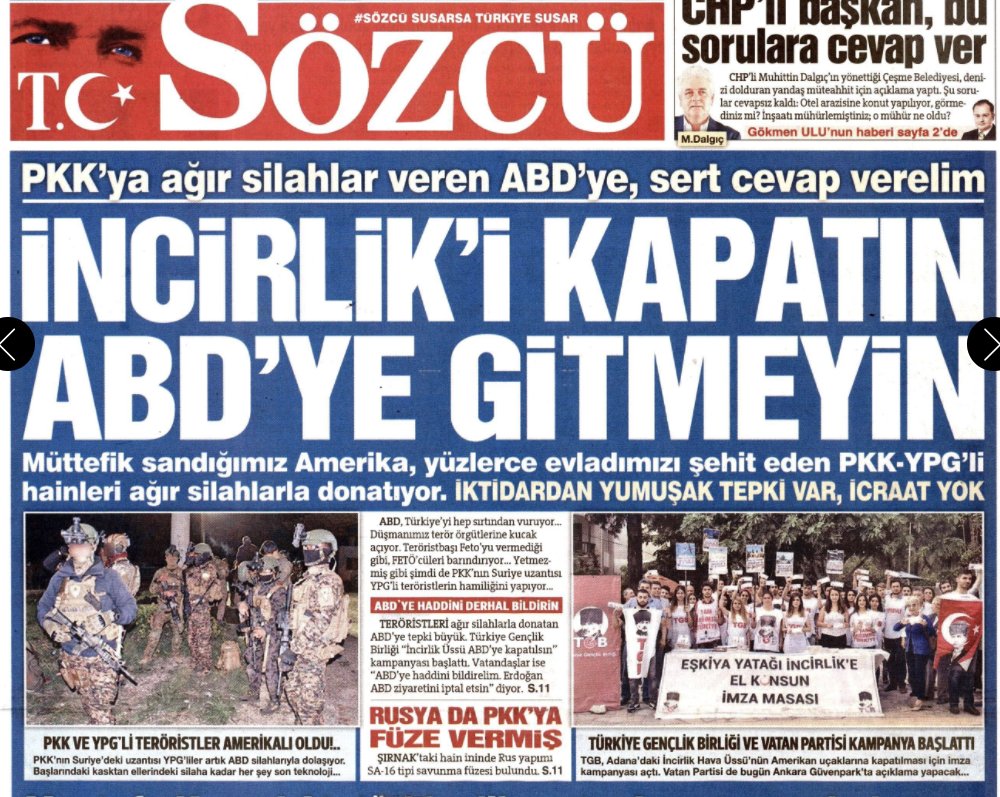 In a front-page editorial published Friday, the newspaper Sozcu called for Incirlik’s complete closure. It’s an unlikely outcome, military officials and observers say, but a clear sign of how dramatically relations have deteriorated between the NATO allies.”

Officials at U.S. European Command echoed those sentiments. “Turkey closing their base, that would be hard to believe,” said Capt. Daniel Hernandez, a spokesman. Incirlik, he added, is “strategically important to them and the coalition.”

There would be painful political costs, too, said Aaron Stein, an expert on U.S.- Turkish relations at the Atlantic Council, a Washington think tank. “They would be blamed internationally for slowing the war against the Islamic State,” he said.

No, “Turkey has concluded it is better to be on the in than the out,”  Stein added. “At least on the in, you have a say at every coalition meeting.” – Military Times

While all this is going on President Trump is scheduled to meet with the President of Turkey, Recep Tayyip Erdogan today at the White House. Turkey, a member of NATO is very much opposed to the US support of the Kurdish militia.

In 2016, the US ordered all military family members to leave Incirlik Air Base.

Featured image of the families of U.S. Airmen and Department of Defense civilians boarding a C-17 Globemaster III during an ordered departure, March 30, 2016, at Incirlik Air Base, Turkey by Senior Airman John Nieves Camacho, US Air Force

This article is courtesy of Fighter Sweep.

Germany Considering Jordan as Alternative to Turkey’s Incirlik Air Base

Failed Turkey Coup-awkward position for US forces stationed in Turkey

Will Turkey kick out the Americans?